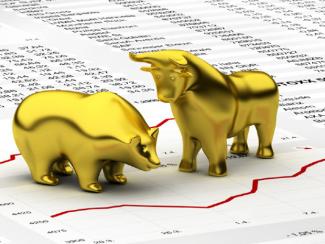 Consumer confidence matched this positive performance, as the University of Michigan Consumer Sentiment measurement beat expectations in January and reached the highest levels since 2004. However, one piece of data we received last week gave a less rosy view of the economy: initial GDP reports.

What Happened: GDP Missed Projections
On Friday, we received the first report on real GDP for the fourth quarter of 2016. Growth declined significantly to come in at 1.9%—down from the third quarter’s reading of 3.5%.

Looking deeper
Many aspects of our economy showed solid growth in the fourth quarter. Household purchases grew, business-equipment spending advanced for the first time in over a year, and inventory accumulation increased. Net exports, however, pulled growth down by 1.7%—the biggest drag since 2010—as we saw a jump in imports coupled with a decline in exports. Working to increase U.S. exports is important because it can help strengthen America's economy, support additional jobs, and promote sustainable growth.

Without net exports pulling down economic expansion, fourth-quarter GDP could have been even higher than in the third quarter. Trade is integral to our economy, and changes in the balance between imports and exports measurably effect growth. The new administration’s potential plans to tax Mexican imports, change trade relationships with China, and restrict visitors from certain countries could affect our imports and exports—and thus our economy.

Between lagging GDP and the Dow reaching historic levels, this week showed us a range of perspectives on where the economy now stands. The markets will always have uncertainty and unanswered questions, and—as always—we must stay focused on the fundamentals that drive performance in the long term. For now, we will continue monitoring policy developments and the trade deficit to determine how they may impact economic growth in 2017 and beyond. We will also pay close attention to the economic data that gives the deep insight upon which we build our strategies for pursuing your goals.